Professor Ian Stansfield from the University of Aberdeen has recently been awarded funding
for a collaborative project investigating how to optimize the production of biologics, which was catalyzed by his participation at BioProNET events.

The production of vaccines, antibodies and other proteins in cell lines can induce cellular stress, which can lead to errors in translation — including ribosome frameshift errors. Such mistranslation can compromise the yield and quality of the protein product, and hence the safety and efficacy of biologics. Ian’s project will pursue a better understanding of causes of translational error through the design and application of novel reporters of mistranslation.

“Initial discussions on this project were started as a result of the BioProNET sandpit meeting, held in June 2015, when I made initial contact with a scientist from the biotechnology company Fujifilm Diosynth Biotechnologies,” says Ian.

As a result of this networking meeting, Ian co-organized a BioProNet-sponsored workshop on recombinant protein authenticity, together with colleagues Mick Tuite and Tobias von der Haar from the University of Kent. Ian commented “The attendance of scientists from Fujifilm at our BioProNET-sponsored workshop in London consolidated ideas for the project”.

The project includes collaboration partner Professor Phil Farabaugh, a molecular biologist from University of Maryland, USA, and physicist Dr Mamen Romano (University of Aberdeen) who will be mathematically modelling gene expression processes. Ian’s group will then use synthetic biology approaches to  couple the output from the new mistranslation sensors to recombinant protein expression, in order to autoregulate mistranslation and the quality of the recombinant protein product.

Fujifilm will test these synthetic gene circuits in in yeast and E.coli to maximise the impact of this research on industrial biotechnology.

More about the project, which is jointly funded by the BBSRC (to Ian Stansfield and Mamen Romano) and the US National Science Foundation (to Phil Farabaugh) can be found here.

Proof of Concept funding from BioProNET has enabled Jim Warwicker and colleagues from the University to build a webtool that predicts protein solubility. Recombinant biologics often have low solubility, due to their high concentrations, sequence and three-dimensional structure. The accumulation of insoluble protein agglomerates can lead to the formation of aggregates, which can impact biological activity and immunogenicity of a biologic.

The funding from BioProNET enabled Jim and colleagues to develop existing code into a user-friendly web format. Users (anyone!) can paste a single sequence of amino acids into the tool; the software compares this sequence to a benchmark dataset of proteins with known solubility, and then returns a set of calculations that predict solubility of the protein based on its sequence.

The programme calculates a variety of properties — such as amino acid composition, net predicted charge, predicted pI value, ratio of conservative amino acids, propensity for disorder, propensity for forming beta strands and sheets — that indicate how soluble the entered amino acid sequence is likely to be.

The webtool is available here:
http://www.protein-sol.manchester.ac.uk/

The project is already bearing fruit, as it has been used as part of a successful proposal to the EPSRC formulation call. The software is still under development and further improvements, including those based on user-feedback will be added.

BioProNet is delighted to have supported Professor Natalio Krasnogor from the University of Newcastle in his successful grant application entitled ‘Synthetic Portabolomics: Leading the Way at the Crossroads of the Digital and the Bio Economies’. Natalio and his co-investigators were awarded a total of £8.1m of which £5.3M was from EPSRC, £2.5M was from the University of Newcastle and £0.4M was from industry collaborators.

Natalio’s work will be focused on a novel area of synthetic biology, called portabolomics. Currently, novel genetic circuits are designed for a single organism (such as E.coli); the circuit needs to be re-engineered for each new organism that is studied – a process which is time consuming and costly. Natalio and his multidisciplinary team aim to standardise the connection between a given genetic circuit and the chassis organism, by understanding the networks of molecular processes that occur in a cell. They will develop a set of academically and industrially useful organisms where the ‘plug-in’ points for the genetic circuit will be the same for each of the organisms, allowing the genetic circuit to be moved from one organism to another.

Around 900 school children, aged 11-14 attended the event, and many learned the difficultities in making antibody-based medicines by trying to make replica biologics out of modelling balloons.

The event was covered in a local newspaper and by Kent and Medway STEM, including some pictures of the students’ models. Although the event was called ‘Big Bang’ we’re happy to report that not too many of our balloons burst! 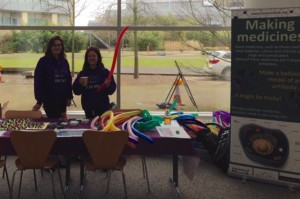 We currently have around 530 members, of which over 35% come from industry and non-university institutions. Around 80 different companies — from SMEs to large multinationals — have employees who are members of BioProNET. The word cloud below represents companies from which we have members. If you’d like to join them, click here. 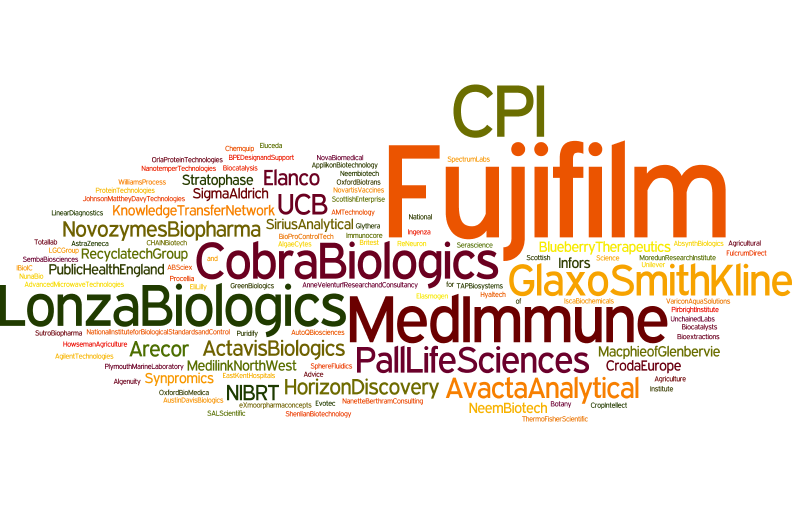 Our members come from almost all corners of the UK – see the member map below. In addition, we have members in Ireland, China, Kenya, USA, France and Malaysia. 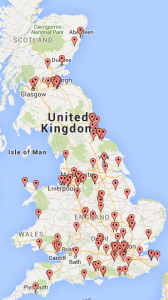